Taxidermy has been a passion of mine, something I wanted to learn more about, since my youth. At 16, I started the process of learning the art. After high school I attended Piedmont Community College and worked in taxidermy part-time. In 2001, I was able to open Wyrick’s Taxidermy as a full-time business that has been thriving ever since. Along with the work I complete, I enjoy learning new skills and competing at shows. Every year I attend conventions and events that help to broaden my knowledge and showcase my work.

Through the years I have acquired numerous ribbons and awards, such as NC Certified Taxidermist, a prestigious award in competition. Recently my children have shown interest in taxidermy and have begun to compete, earning their first awards and recognition as well. I work with any and all legally taken game. I’ve became good friends with a bunch of other taxidermists and have worked with them on various projects .I have experience in all aspects of taxidermy.

Fish are my favorite thing to work on. I’ve done wholesale fish work for taxidermists from over 20 different states.

In 1998 I became a volunteer firefighter for the Town of Gibsonville .The first certification I completed was Medical Responder. I was a volunteer until 2007 when I was hired by the town as a Paid Firefighter working 24 hour shifts. We formed a Firefighters Challenge Team at Gibsonville. I’ve won a few awards at these Challenges. They are courses/obstacles set up in different scenarios that we might face in real life. The object of the course is to be the fastest without breaking pre-set rules. I’ve taken many different classes as a Firefighter. I’m certified as a EMT, Fire Instructor, Aerial Operator, Fire & Life Safety Educator,Driver Operator and Fire Officer. I have a Associates degree in Fire Administration and a Certificate in Emergency Management. My current rank is Captain/EMT.

I’ve been married for 17yrs and my wife’s name is Nicole. She usually doesn’t get too involved in the business..lol. 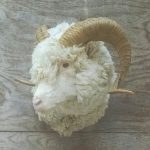 I haven't had quite as many repairs/repaint jobs this year but I wanted to post a couple with before and after pictures. One is a VERY old Barbosa ram.A mouse had ate the nose off of it and left lots of droppings in the wool.I was able to sculpt a new nose and clean the wool. These are a very tough … END_OF_DOCUMENT_TOKEN_TO_BE_REPLACED

This website uses cookies to improve your experience while you navigate through the website. Out of these, the cookies that are categorized as necessary are stored on your browser as they are essential for the working of basic functionalities of the website. We also use third-party cookies that help us analyze and understand how you use this website. These cookies will be stored in your browser only with your consent. You also have the option to opt-out of these cookies. But opting out of some of these cookies may affect your browsing experience.
Necessary Always Enabled
Necessary cookies are absolutely essential for the website to function properly. This category only includes cookies that ensures basic functionalities and security features of the website. These cookies do not store any personal information.
Non-necessary
Any cookies that may not be particularly necessary for the website to function and is used specifically to collect user personal data via analytics, ads, other embedded contents are termed as non-necessary cookies. It is mandatory to procure user consent prior to running these cookies on your website.
SAVE & ACCEPT